We are back in Sydney after a very enjoyable trip up the East Coast to the New South Wales, Queensland border with a few days there on the Gold Coast.
Thank you all for concerns re Jeremy’s health, I can report that by the time we set off last Tuesday week, he was feeling much better and well enough to take on the driving and enjoy our trip.  On the first day we only travelled as far as Newcastle which is only about 2hrs North of Sydney by the most direct route.  We however, diverted by the more scenic coastal route travelling up the East side of Lake Macquairie and diverting to check out Terrigal on the way as there is a nice hotel we would like to visit there some time.  We stopped at Toronto at the Northern end of Lake Macquairie for lunch before heading into Newcastle for the night.  We had a swim in the hotels waterfront pool and enjoyed a pleasant evening in a local restaurant further along the waterfront.
The next day was a fairly long drive to Bellingen.  The scenery began to change from the forested areas to more farmland with equine centres and a lot of cattle farms on the flat flood plains bordering great wide rivers.  We called into Port Macquairie for a lunch stop and arrived at our B and B in the hills outside Bellingen in time for the complimentary tea and cake advertised as being served between 3 and 6.  Yum! The B and B was run by Fritz and Susannah, German and Australian respectively, who were very attentive hosts.  It was built in the style of a Tuscan villa with an inner courtyard.  We sat outside for tea and realised we were being watched from the rafters of the verandah by an inquisitive possum.  The livestock did not end there.  When we returned from dinner in town later that night.  There were 5 large green frogs lined up on the picture in the entrance hallway!  They apparently “live” behind the picture and come out at night! Thankfully, our room seemed uninhabited by any further visitors!  Bellingen had obviously been a thriving little town in the early 20th century and some of the old buildings remained intact and well maintained.  There was a lovely old drapery store and the window displays still echoed the twenties era.  I tried on a dress which would compliment our Bentleys era very well but not sure if or when I would ever wear it, so resisted the temptation to splurge! 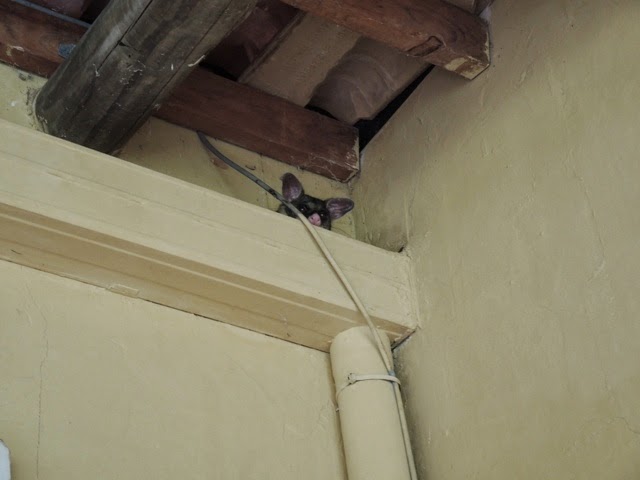 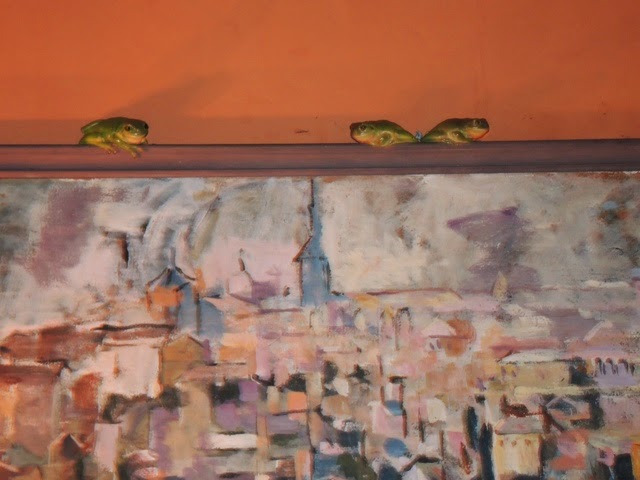 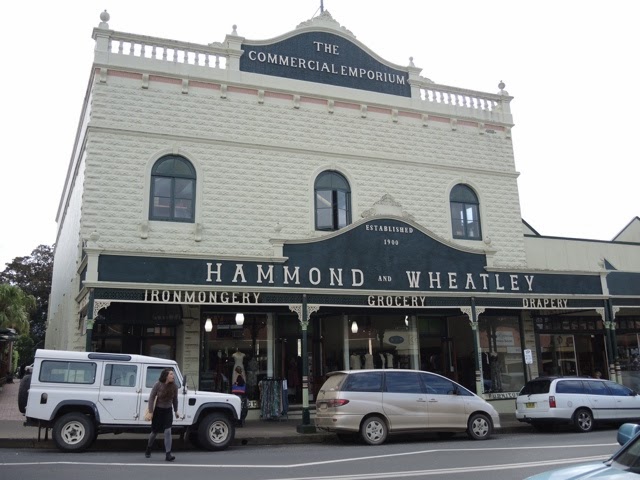 From Bellingen another fairly long days drive took us to Byron Bay.  We passed more flat plains along big rivers but also hillsides filled with Banana palms and the cattle on the plains were replaced by sugar cane fields.  Every little village we passed through (I say little village, which to me they were but they are all cities here!) had at its centre a cooperative sugar refinery.
By the time we arrived at Byron Bay it was raining so we did not spend much time in town but went to our lovely accommodation on the other side of the peninsular.  It was set in the rainforest with lodges set out amongst the trees and walkways back to the reception area where there was a lovely pool and bar and restaurant.  From our room we could hear the surf crashing on the beach but it was quite a walk through the forest to get there.  We had a lovely meal in the restaurant that night, then up bright and early (thankfully the rain clouds had disappeared) to drive the hours journey onward to The Gold Coast airport to meet up with Oli, Angie and Jack flying in from Sydney on the early flight.  A bit confusing as Queensland is 1hour ahead of NSW but we managed not to get it wrong.  Some people live one side of the border and work the other, so it must be a bit odd for them.  They leave work to come home from Queensland to NSW and get home before fellow NSW workers have clocked off!
We met up with the family, Jack, not hugely impressed with his ride on an “aeropene” when what he really wanted to do was go on a bus but only an hours flight, so not too arduous for them.  It was only a short drive back into NSW to our resort.  The accommodation was very impressive, a big 3 bed roomed well equipped penthouse suite, overlooking a magnificent beach.  As well as a balcony it had stairs up to a huge roof terrace which had a hot tub.  The kitchen was very well equipped with full cooker and American fridge freezer so we could comfortably cater in or use the hotel facilities or the little strip of restaurants and stores just alongside the resort.  We also had the use of 2 pools, one good sized standard pool and another more family friendly “tropical lagoon”. Complete with sandy beach and gently shelving entry and exit.  All in all a good “crash” destination.  “Crash” is pretty much what we did for the next couple of days, although on the Sunday we did think a drive out to view the local area may be appropriate.  We headed up into the hills away from the coast and called in at “Tropical Fruit World”. (It seems they can make a theme park out of anything!). We were going to go in but when we discovered it involved a 2hr escorted tour and cost $40 per head, we decided that it was probably not age appropriate for Jack so drove on in a bit of a loop enjoying the scenery before returning to the resort for more relaxing! 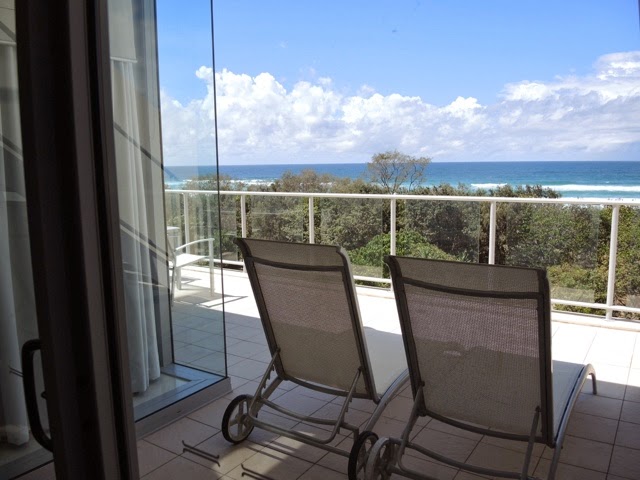 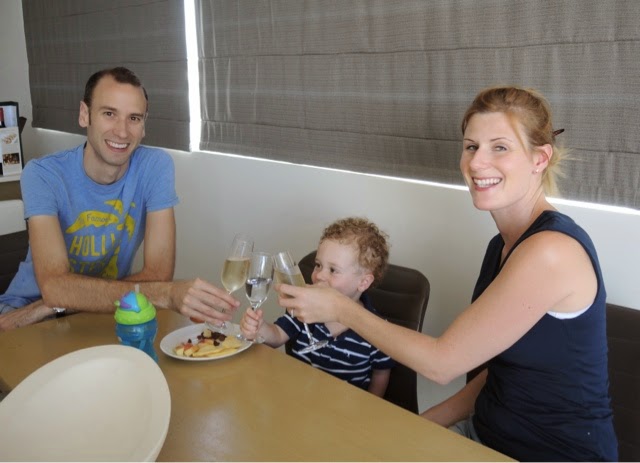 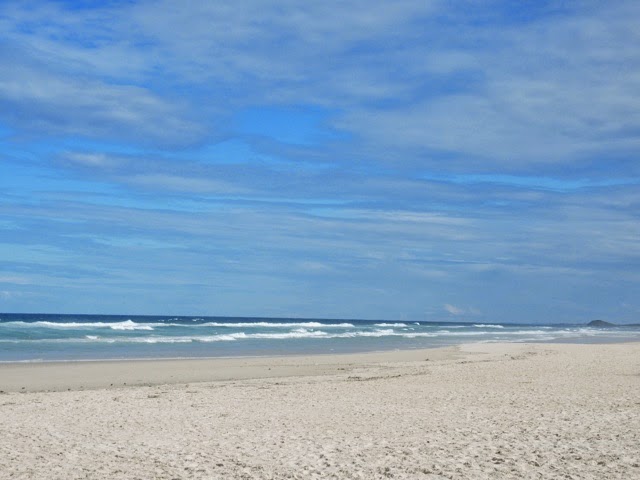 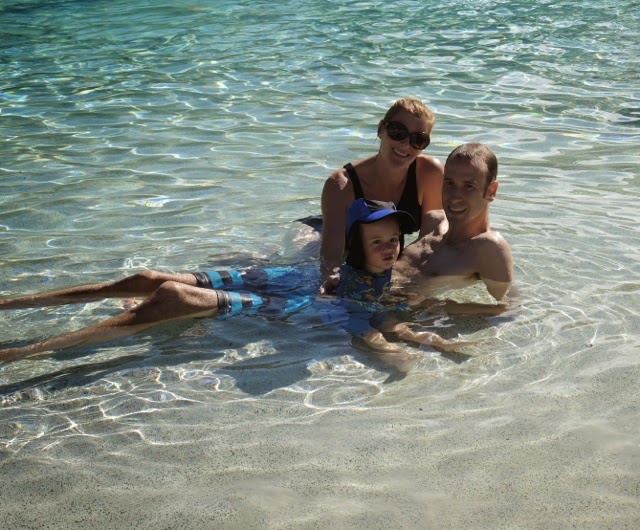 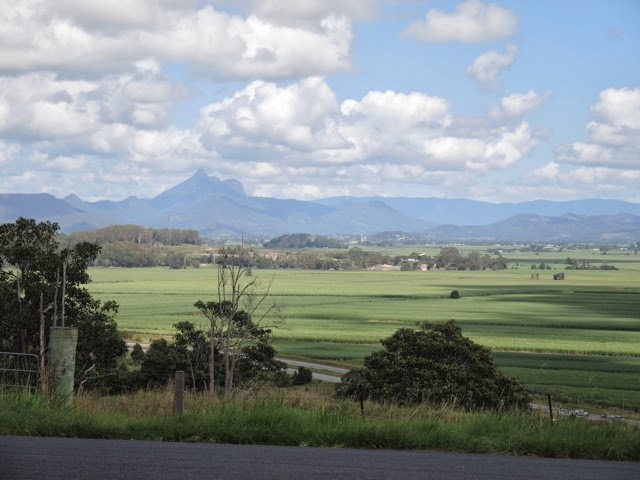 O,A and J flew out on Sunday evening leaving us 1 more night before we started our return road journey on Monday.  We had about 7hrs driving that day to Port Macquairie where we stayed in a fairly grim room in a mediocre hotel which along with more grey skies and rain did not warm us to Port Macquairie although the waterfront area was nice and the high spot was that whilst we were having an early evening drink along the estuary water front, a pod dolphins came in from the sea and swam lazily up river.  The news showed that Sydney had had major storms and flash flooding that day and was due more the next, so, not looking forward to driving on home in torrential rain, we were up for an early start the next day and on the road by 8.30.  We were luck however with no rain en route and got back into Sydney by about 1.30.  The forecast rain seemed to delay its arrival until today, which is how and why I have found the time to sit down and writ this!  Now however, the supermarket beckons!  I need to restock for just over a week then we are off on our travels again up to Darwin, and kakadoo (Not sure that’s how you spell it but I will know by the time we get back and I post my next blog) 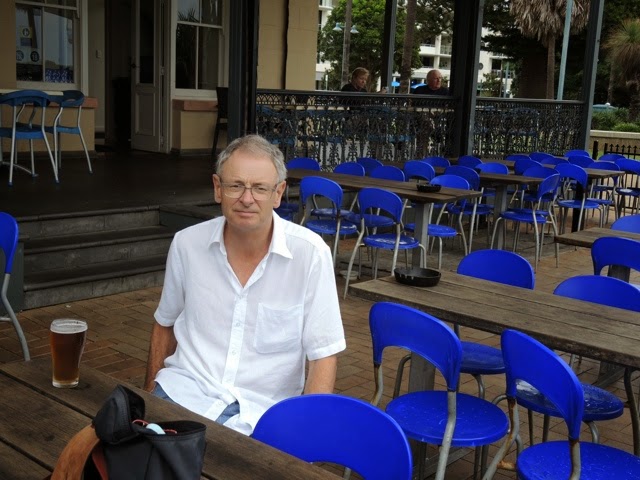 Love to you all.  Send News!
error: Content is protected !!