Sorry it is nearly a month since I last blogged but it has been quite a busy one.  Paul and Moyra arrived on the 5th Jan, delayed by a day as they missed their connection in Dubai and had to grab a few hours sleep in a hotel and take the next flight.  The result seems to have been that they did not suffer quite as badly with jet lag as we did this trip and acclimatised pretty quickly.  This was good as after barely a week of dashing around catching up with Sydney friends and revisiting some favourite places, we all boarded a flight to Adelaide to start our planned South Australia trip.
I don’t know if news of the bush fires raging in the Adelaide Hills reached UK but our hotel was very close to the region in trouble as also were our friends Jenny and Charles with whom we planned to meet up.  A few days before we were due to fly, our travel agent suggested relocating down to the coast and Jenny (on the ground as it were) agreed this may be sensible.  However the temperature cooled right down and drenching rain came through a couple of days before we were due to fly allowing the hard working fire crews to get the fire under control so we reverted to our original plan and thankfully Jenny, Charles and their neighbours could sleep soundly again.
We picked up a hire car at Adelaide airport and drove to our hotel at Mount Lofty a few minutes from Jenny and Charles’ and joined them at their house for lunch.  It was lovely to see them again and needless to say Charles had selected several bottles of S Australian wine for us to sample.  Moyra, ever a polite guest complied!  In the afternoon, their lovely family came up to see us and we met grand daughter Georgia (a couple of weeks younger than Jack) and Jamie’s wife and daughter for the first time. 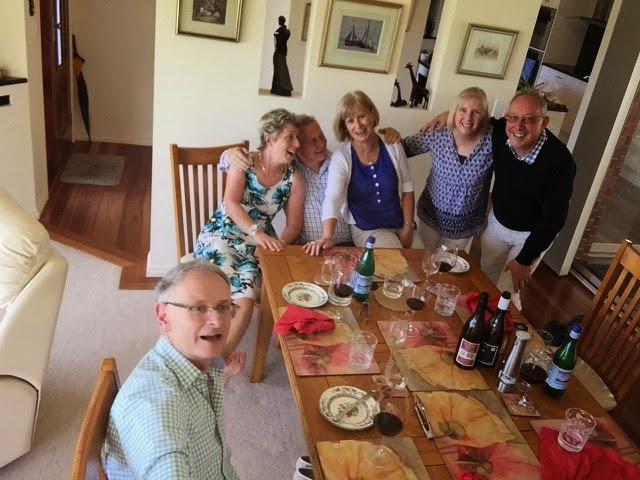 SELFIE WITH THE CHRISTIE’S
The following day a 3 to 4hr drive took us to the Clare Valley wine region.  Having left Adelaide in unseasonable cool temperatures, we headed north expecting it to warm up.  We had packed all our coolest clothes expecting S Australia and especially the Flinders where we were heading to be unbearably hot at this time of year but temperatures at this stage had not topped 18deg!
We were booked into a 3 room B and B run by a delightful couple Michael and David.  Unfortunately though we took them by surprise as they were expecting us in February not January!  Luckily with no other guests, they were able to accommodate us and David pulled out all the stops and produced a fantastic dinner for us.  We stayed 2 nights but unfortunately, our day in Clare was wet miserable and a cold 10deg!  Plans to hire bikes and ride the cycle trail round the winery’s were abandoned and instead we toured the area by car and visited an old copper mine.  It was interesting to find how that area had been inhabited by Cornish émigrés who had brought their mining skills to Australia when mining in Cornwall became uneconomic. 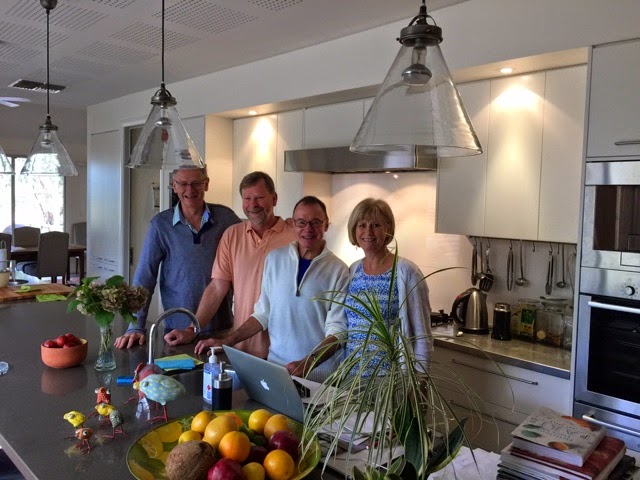 WITH MICHAEL AND DAVID 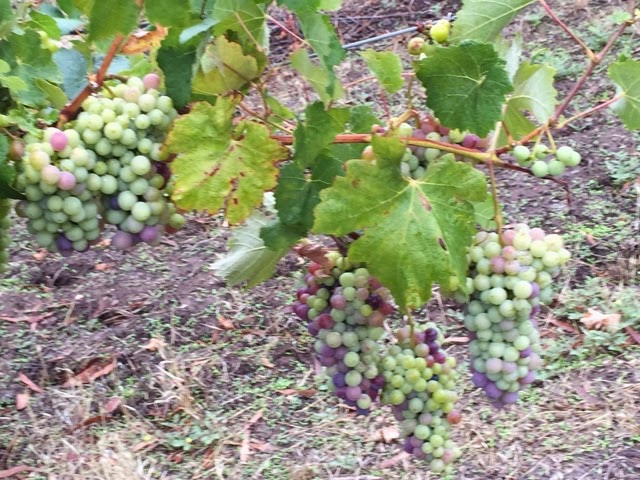 RIPENING GRAPES IN THE CLARE VALLEY
Before heading on North for the Flinders ranges the next day, we stopped off in the local town to buy some slightly warmer clothing although fortunately it would only be required in the early morning and late evening.  I had expected that we might get unbearable searing heat in the Flinders at this time of year but we had 3 days there with the temperature in the comfortable upper 20’s so we were able to do some great walking and our hosts at the Station on which we were staying took us out on 4wheel drive vehicles to enjoy the scenery and wildlife.  The Station was, until 3 years ago, a Sheep station covering 63,000 acres but the new owner is a conservationist and believes over grazing has seriously damaged the land and is trying to redress the balance and allow natural flora and fauna to return to the land.  In order to do this, they are also trying to rid the area of non native species including goats, feral cats and rabbits.  The couple who manage the Station South African born Brendan and his Scottish wife Katherine are more conservationist than host and if there are no guests, are out shooting the non native species and are passionate and knowledgeable about what they are doing.  Katherine was our guide on most outings and I have never met anyone who knew more about the local animals, birds and flora.  We saw 3 types of kangaroo, many reptiles and birds so that after 3 very interesting days when heading back to Adelaide then onward to Kangaroo Island, we felt pretty much Kangarooed out! 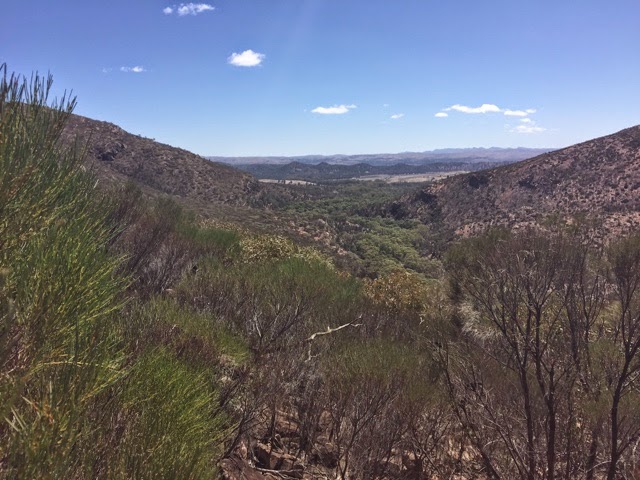 SUNRISE OVER THE FLINDERS 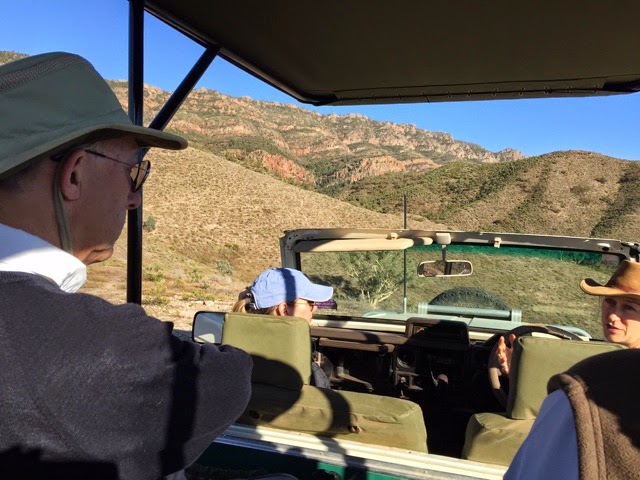 4 WHEEL DRIVING
Our hotel in Adelaide was again expecting us in February, suggesting it was our travel agent making the mistakes rather than our hosts.  Also they seemed to have one room booked in the name of Jeremy Snowden and one in the name of Diana Snowden.  This got more hilarious when we got to our Kangaroo Island Accommodation where they had printed out welcome sheets to “Jeremy and Moyra” and “Paul and Diana”. They also took our luggage direct to our rooms and when we got there, we found Jeremy’s and Paul’s cases in one room and Moyra’s and mine in the other. Now I know we do a lot of travelling together but swingers, we are not!
Luckily, Kangaroo Island is not all about Kangaroos as we were staying at the very luxurious Southern Ocean Lodge.  It is owned by the same group that own Capella Lodge, our favourite place in Lord Howe Island.  It is somewhat larger, so lacks quite the intimacy and friendliness of Capella but the location in a curved building around a cliff edge with magnificent sea views, is stunning.  The building is curved in such a way that each of the 21 rooms has privacy on their deck and an equal view and when viewing the building from the adjacent cliffs or from the water it blends into its environment.  All food and drink was included in the price so we made sure we got our money’s worth!  Outings were also included but having had guided trips over the previous day’s we preferred to do some self guided walks from the Lodge.  We also added to our wildlife tally by spotting echidna, tamar wallaby’s and koala.  The latter being in much shorter supply than when J and I last visited the Island in 2008.  Apparently, they were becoming rather over populated having a detrimental effect on some of the gum trees so conservation projects have started sterilising the adult koala to try to reduce the population and these efforts have obviously been very effective. 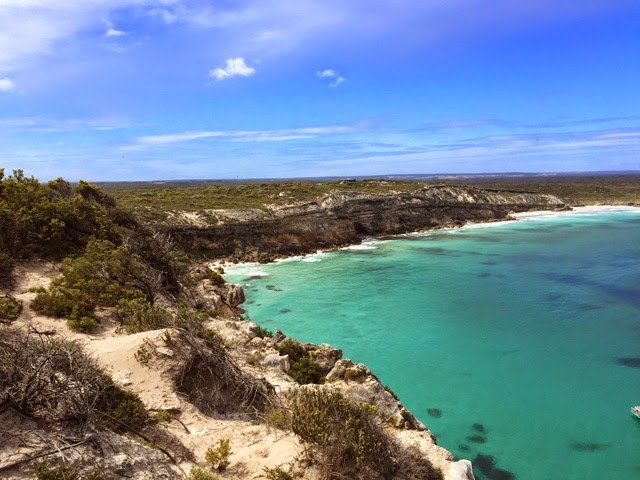 VIEW BACK TO SOUTHERN OCEAN LODGE 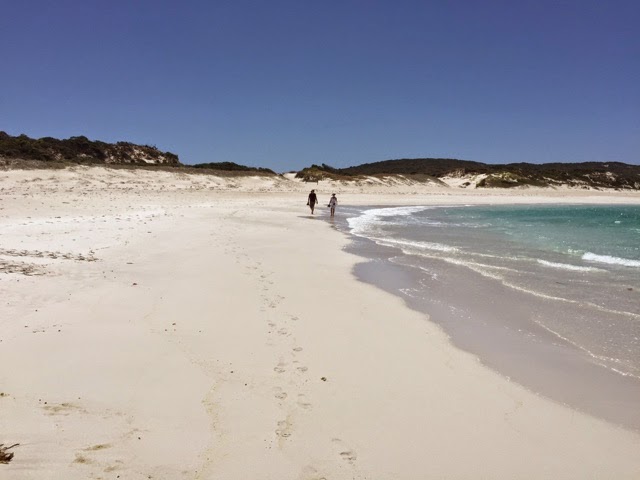 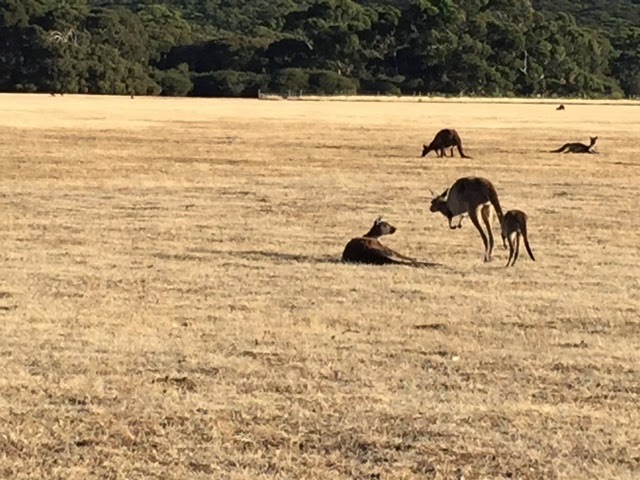 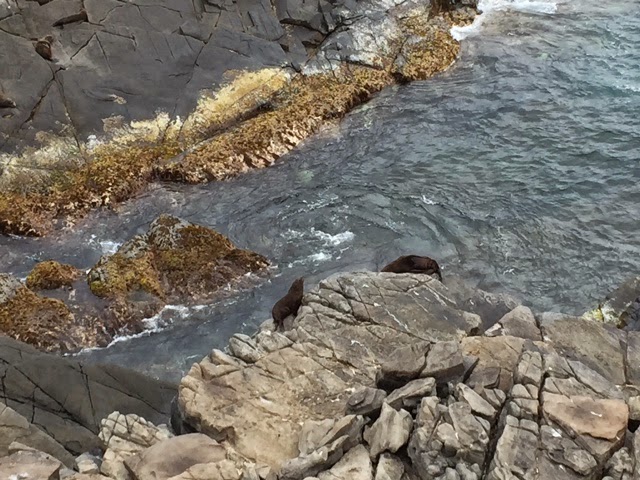 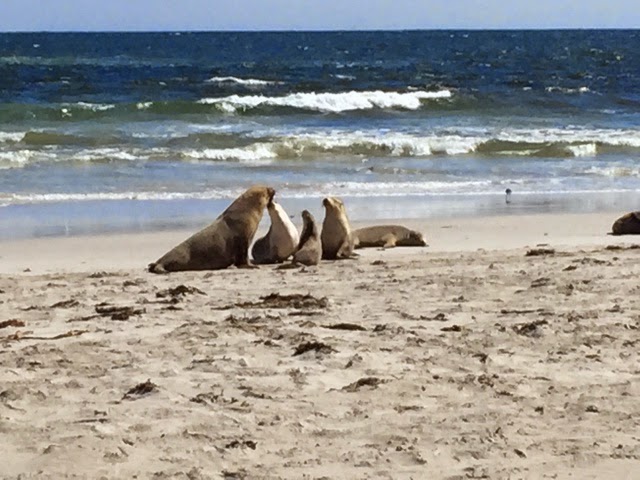 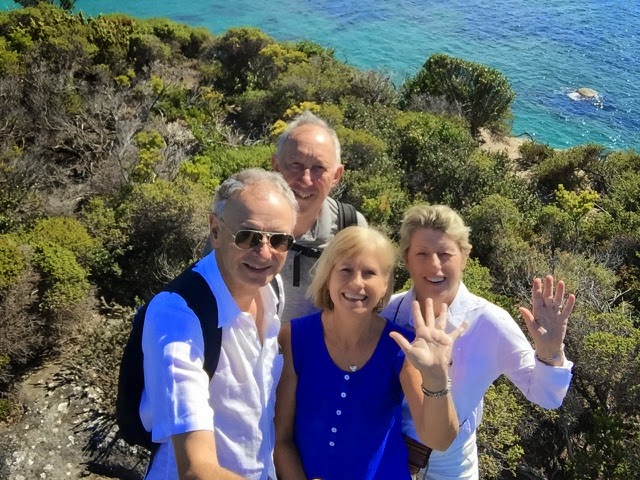 We flew back into Sydney yesterday and the family came up to dinner last night.  Angie is suffering a bit with the high humidity but last weeks scan showed everything as it should be, she is now about 6 weeks from due date so has already progressed beyond Jacks arrival so we are now on standby if needed to look after Jack but hopefully she will carry for at least another month.  Jack had his 3rd birthday whilst we were away and next week starts preschool.  He is going for a few hours today for an initiation day and seemed to be quite looking forward to it. 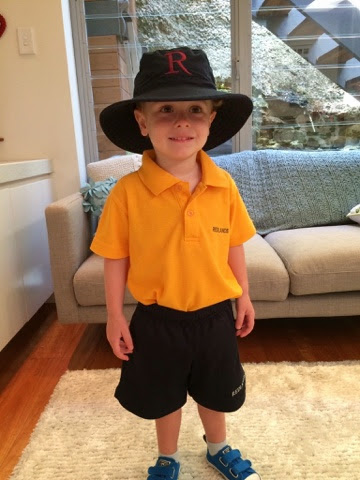 ALL AUSSIE JACKAROO READY FOR PRE-SCHOOL
Moyra and Paul leave us on Sunday heading firstly to Brisbane and Noosa then onwards to 3 weeks in Sri Lanka and home.  It has been great having guests, with no one else planned this year, we will miss them.
Hope all is well in the old country everyone’s news will be gratefully received.
error: Content is protected !!