I am going to re share this blog as for some reason some of the photos did not load last time!

Hello everyone.  We are back in Sydney for the final 3 weeks of our stay before heading up over in about 3 weeks time. (In fact we leave here exactly 3 weeks today).  Since my last missive, we have had a couple of enjoyable rekkies out of Sydney.
In early March, we headed to Mudgee which is about a 3 hour drive from here across the Blue Mountains to the fertile foothills on the other side which is a mainly farming region with plenty of fresh produce and winery’s.  We enjoyed some tastings of local wines, cheeses and fruit and returned 3 days later with the car boot full of our favourites.  We preferred the wines generally to the Hunter Valley wines and got quite into the Pinot Gris and Rieslings which we are working hard on developing a taste for.  A completely different wine from the Blue Nun and Black Tower of our younger wine drinking days! 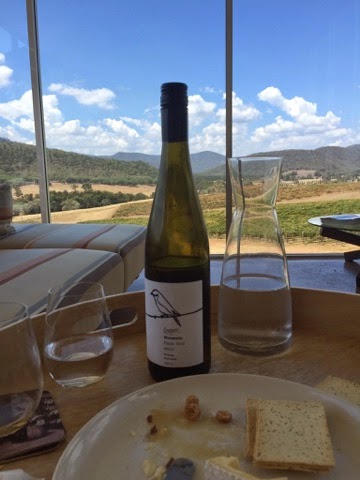 The scenery around Mudgee was very pretty and the town although fairly basic outback had a couple of reasonable restaurants for eating out so it proved a pleasant place for a change from city life.  We had very hot weather which meant plans for walks were somewhat curtailed as it was really too much in the heat of the day and in fact were disappointed that we did not manage to discover any trails although I am sure if we had worked harder at it, there would have been some opportunities.  What we did like though, was that with the wineries there being so much smaller and less commercial than in the Hunter, we found ourselves talking to the growers and as it was harvest time even got invited out to watch the men and machines at work.  Then taken around the vats of fermenting grapes and invited to taste and smell at various stages.  Very interesting. 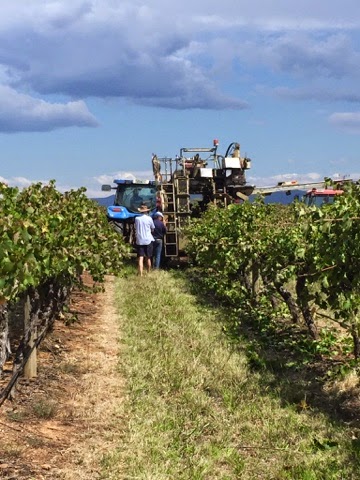 Jeremy picks up a few tips! 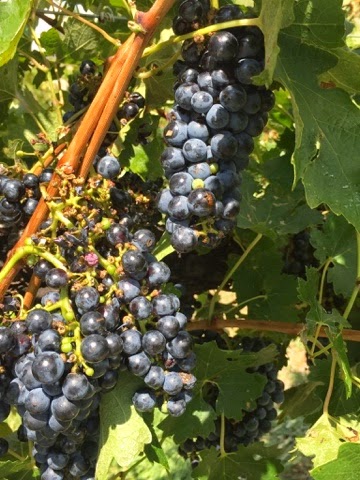 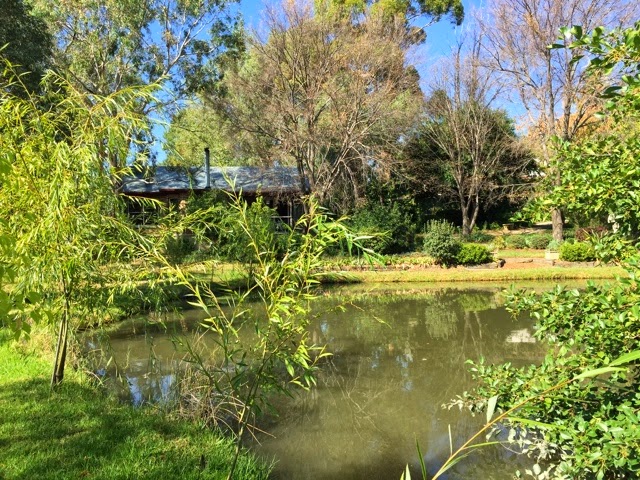 Our Lake side Accommodation.
Our last morning we woke up to thunder clouds and as we drove back through the Blue Mountains we got some really thick mist and heavy rain.  This was a shame as we stopped off at the Blue Mountains Botanic gardens which are obviously stunning on a clear day but although we did our best to enjoy them in the pouring rain, we were deprived of what must be some fabulous views of the mountains.  We have never visited before as it is quite a way from the general tourist centres of Leura and Katoomba but we will make sure to go that way again as it is also a very pretty drive from Sydney.
Sydney life resumed again for about a week before we flew up to Noosa for 5 days.  In fact we rented a house just down the coast from Noosa at Sunshine Beach a lovely little resort town with a little strip of shops and restaurants and a beach which went on forever!  Noosa and the whole area we absolutely loved!  I think I could live there, it is the first place outside the cities of Australia which seems to have enough about it and if you do want/need some city time, Brisbane is only a couple of hours away.  Noosa splits into 3 areas Noosa Heads chic up market shops and cafes, lovely beach and surrounded by National park (through which we walked on the last day from and to Sunshine Beach about an hour and a half each way), Noosaville is along the Noosa River and from there we hired a self drive boat with 25hp outboard for 4hrs and enjoyed a trip up river and across a lake where we dropped the hook to picnic before returning down to the heads and travelled around the canal like system of lovely properties with water frontage and boats moored off.  In Noosaville, we also had our best meal of the trip, finding the restaurant thanks to Trip advisor and having a lovely meal.  The final mini town is Noosa Junction, so called possibly because the bus and train stations are there, or maybe because it links ville  and heads. One day we did a scenic tourist drive of “the hinterland” which also had some interesting little somewhat new age towns (full of shops selling crystals or offering tarot card readings) and walks to viewing points along the way so we gained views of waterfalls, huge trees and the lovely glass house mountains.  Add to that we were staying in a fabulous house with its own pool secluded enough for night and morning skinny dips and to throw oneself in when returning from a walk or trip feeling very hot and sticky.  It was actually very hot when we were there but not too humid.  The locals were however complaining that as it was supposed to be autumn it should have cooled down some more but for us holiday makers it was perfect. 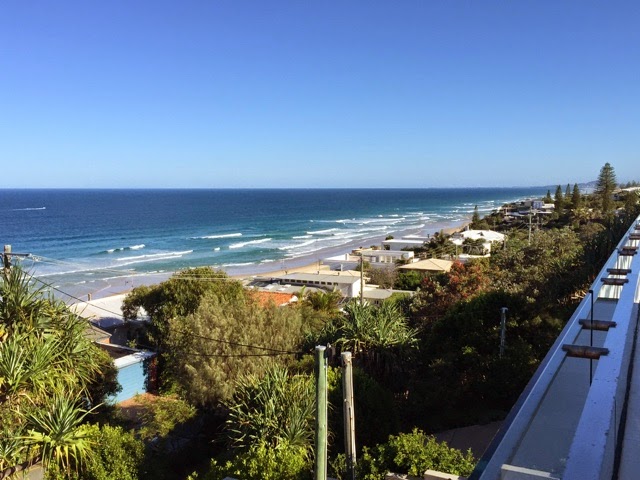 View along Sunshine Beach from the house. 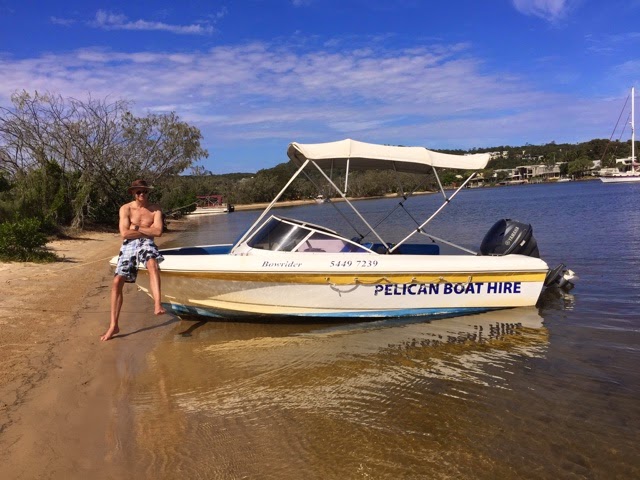 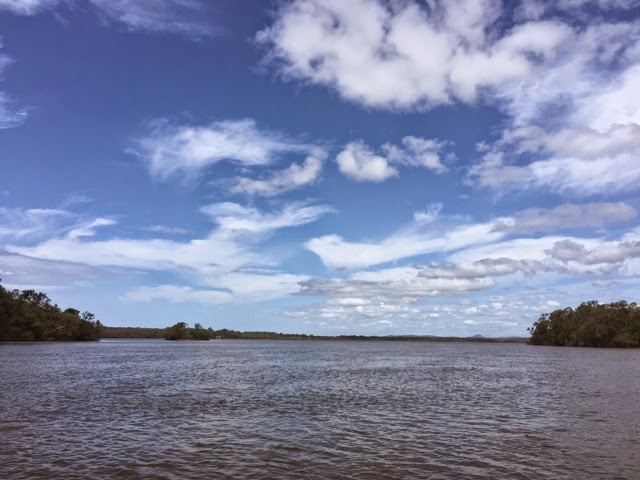 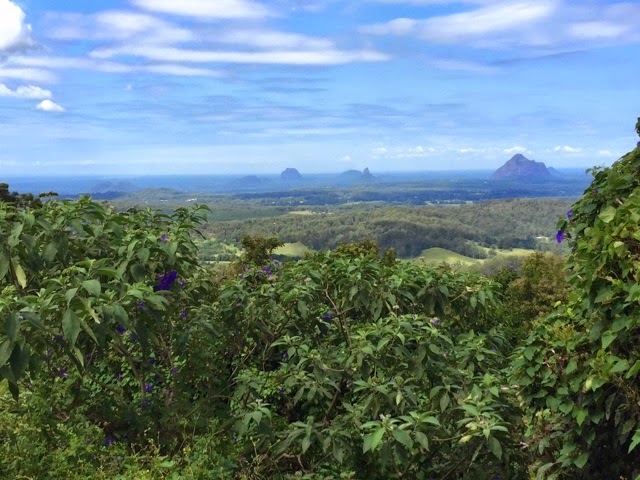 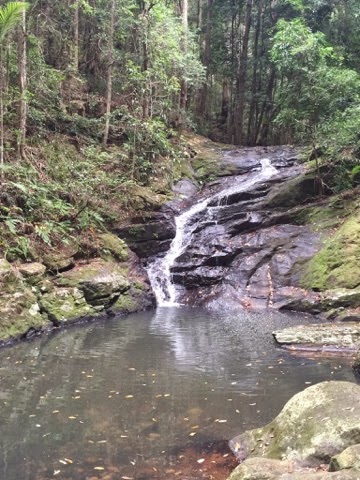 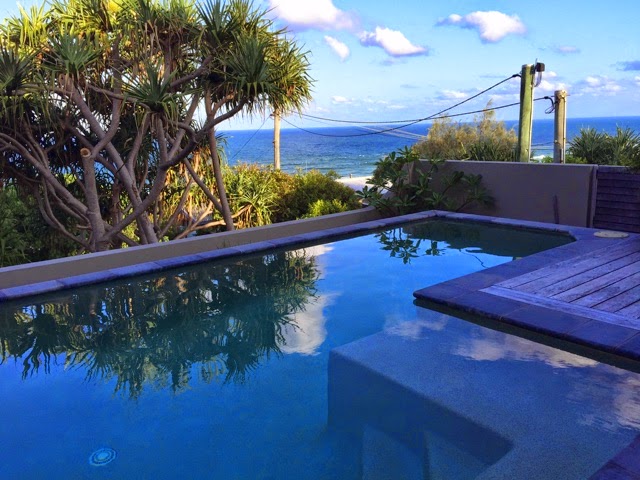 The Pool!
Part of our idea of being in Noosa when we were was to allow Kelly Angies mother a couple of days to settle in before we arrived back in Sydney but her flights did not quite go according to plan.  She was due to leave Newcastle via Dubai with Emirates last Thurs.  Anthony went to check her in on Weds to be told that the flight was overbooked so if she was prepared to travel 24hrs later, they would give her another free return flight to Australia to be taken within the next 12months.  That seemed an offer too good to refuse.  Unfortunately the Friday flight was delayed out of Newcastle hence missing her connection to Sydney so she had to wait in Dubai for 7hrs (allowed access to lounge but no hotel) then onward to Perth where she had to collect and recheck her baggage for Quantas flight with again a 3hr wait.  She touched down in Sydney 10minutes before our inbound flight from Noosa and about 32 hrs after departing Newcastle.  As you can imagine, she was exhausted but a new grand daughter and a grandson 1yr older than when she last saw him bucked her up in no time.  We met them down on the beach for early fish and chip supper on Sunday evening so she managed somehow to keep going for a reasonable bedtime and is coming round well now two days on.
We had Jack for the day yesterday to give Angie and Kelly a chance for uninterrupted Mother daughter chat time and we had a lovely time at the Power House Museum.  I would like to say that the high spot was the steam trains and aeroplanes on show but no, it was the Wiggles Exhibition!  If you don’t know what the Wiggles are, you are probably very lucky but suffice to say it is Australia’s answer to the Teletubbies phenomenon.  I know everyone’s grandchildren are cute and come out with cute things but indulge me here, after all, this is my blog but among yesterday’s gems were.  As Jeremy was putting Jacks shoes on to go out he puts his arms round him and says “I really love you papa”. Then more practically when I take him to the public loo later, he looks up at me from under those long lashes with those hazel eyes and says “I need a bit of peace and quiet”! I told him that as we were in a public loo, I could not leave him or he might get locked in, so I would just stand quietly and wait until he was finished.  That worked.  Then it was my turn so we swapped places and he said “I’ll just stand here quietly to give you some peace and quiet!”  It’s going to be hard saying goodbye this year!  Luckily there’s 2 more waiting back there who I’m longing to see along with all you lot!  See you soon. 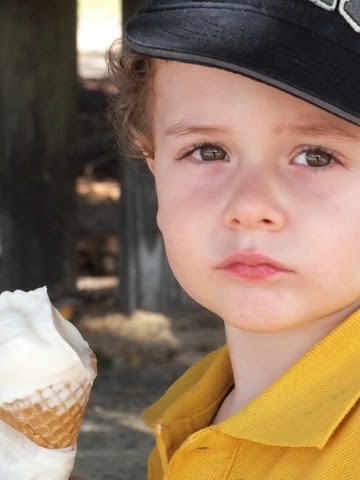